Picture this!  Four Sisters pull out their Les Schwab tire chains, get out the directions and put them on the car for practice in case they need them on the summit of the coast range. Lets step back a few paces and get the full picture.  Sister Colleen Schmitt, Sister Alison Green, Sister Michael Francine and I had planned to go to the beach for Martin Luther King weekend.  A nice four day relaxing weekend to play cards, and celebrate Sister Michael Francine’s birthday on the 16th.

One of the Sisters passed away and the vigil and funeral were scheduled for two of the days of the vacation cutting it in half.  The ice and snow predictions were coming in full force and by 2:00 on Wednesday the 11th it was snowing hard and 6″ had dropped.  I paged the Sisters and asked them to meet me in the parlor where we talked about making the trip that afternoon since no one was at the beach house, and stay till Sunday afternoon which would give us 5 days at the beach!!!  Everyone was in.  We packed our bags and met at the car in an hour.

When we got back to the car, we got out the chains and practiced putting them on. Seemed like a good idea to make sure we could get them on easily and that they fit the car.  The Sisters were the dream team of chain gangs!  They got them on and the hard part was tightening them up.  We got it done, drove a short distance and tightened them again.  We were good to go.  Les Schwab puts out some good tire chains by the way!

We took the chains off and drove out to Murray Blvd., which was mostly open pavement. Our question was what would it be like on the Coast Summit?   If we needed the chains, we were in good hands!   We got past the memorial Tunnel and that was about where the snow and packed ice began.  As things got slippy we switched into 4 wheel drive and said the Rosary. Thanks be to God,  we made it fine!  We drove slowly, no one was on the road but us….good time to travel…and for about 10 to 15 miles were were in snow and ice conditions.

A ways beyond Camp 18 we ran out of snow and ice and had a glorious 5 days at Cannon Beach.  With two teachers in the group, we celebrated Wednesday, Thursday and Friday as news arrived that school was called for the following days.

Meanwhile, back in town… 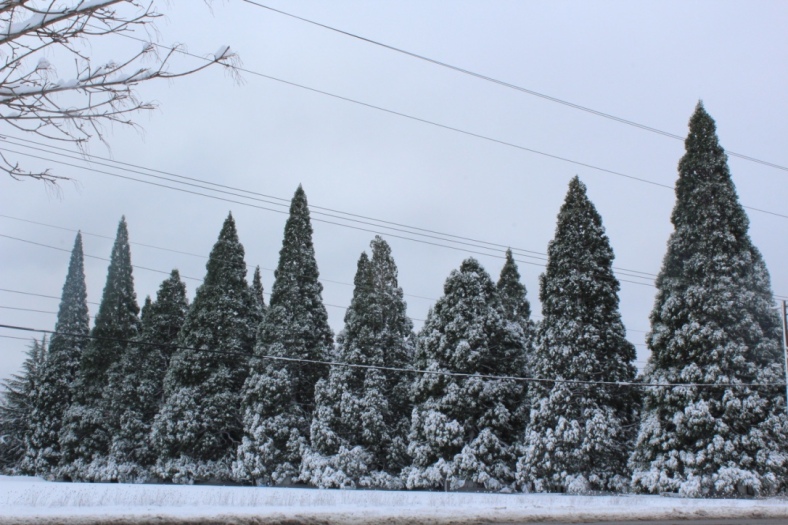