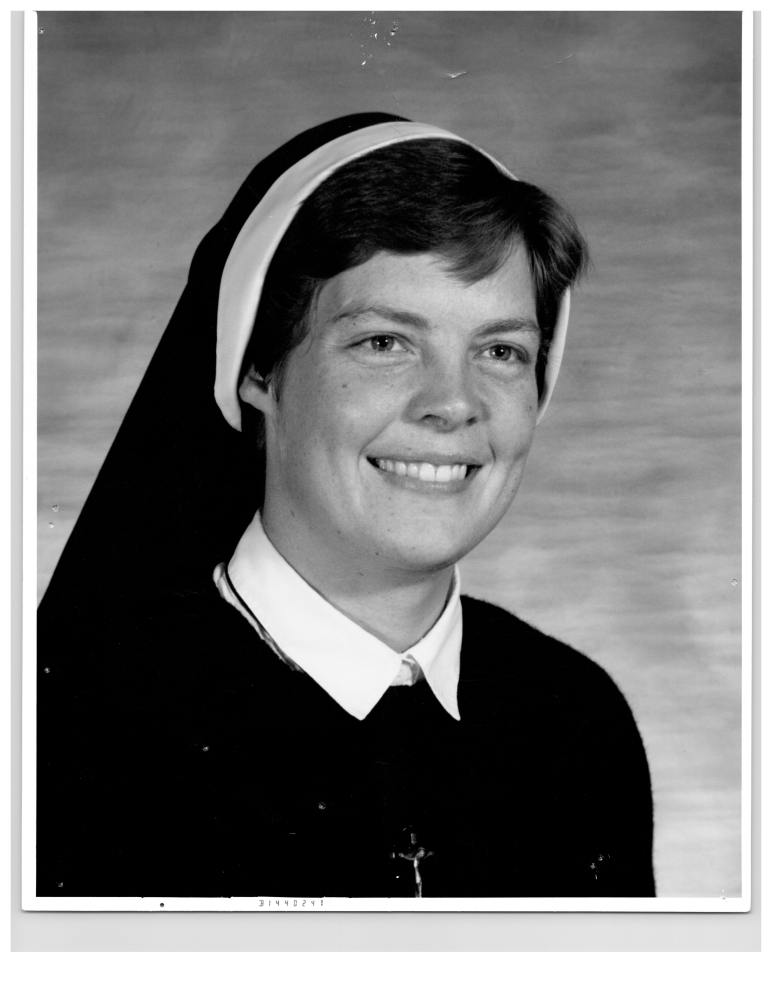 In 1982 I began teaching at St. Mary of the Valley High School while also attending Portland State University to get my fifth year and participating in formation classes.  I taught a couple of classes at the high school then went to PSU for the rest of the day until around 4:00 when I returned for classes at the convent.  I was a busy little “first professed” as I continued to learn the ropes.  I enjoyed teaching at the high school very much and could see myself full time in the future.  I really appreciated teaching at our community high school.

My main assignment was to teach religion and I found enjoyment in coaching the jv Softball team.  Prior to 1991, St. Mary of the Valley was an all-girl school which went co-ed and changed the name to Valley Catholic.  My school experience as a youth had been co-ed and I was more at home in that environment.  I think it is good for youth to be with the opposite gender at school while they have their feet under their parent’s roof.  There are a lot of lessons best learned at home.

I realized how fortunate I was to be called to religious life and what satisfaction I got out of it.  A religious who dedicates their life to Christ has the time to do things that a married person with the responsibilities of family would not have in many cases.  I realized the many talents God had given me and I had the time to develop them.

Fourty years have passed since I entered Religious Life.  Things have changed as the world changes.  Nothing stays the same and that is for the most part good, I think.  Not in all cases but mostly.  When I was in formation, we had what was called a “Rule of Separation” which mean’t if you were in formation you could not talk with the sisters who were professed.  Why? You are probably asking?  Formation takes place through the interaction with one formation director.  Every single person has a suggestion for how something should be done.  If you want a uniform formation for your members in religious life, best it be done through one, trained director.   In my day there were a dozen of us in various stages of formation and we were able to create a good community of young sisters.

Today, we no longer have the rule of separation, but we do have 4 Sisters in formation, three of whom are under the age of 30.  They are a wonderful group of young women who give me a lot of hope and confidence in our future as a religious community.   The Sisters of St. Mary of Oregon accept women between the ages of 18 and 45.  Even though we no longer have a rule of separation, the older sisters have an understanding of what should be deferred to the formation director.

As you may know, my day job is at CYO/Camp Howard.  This organization is a Catholic Charities Agency in the Archdiocese of Portland.  I am a member of the Sisters of St. Mary of Oregon, employed by CYO/Camp Howard.  My blog covers mostly my work at CYO/CH but from time to time I give you a glimpse of my religious life.  This is one of those times!

My night job is Archivist for the Sisters of St. Mary of Oregon and this weekend I am in Louisville, KY attending a conference with the Archivists for Congregations of Women Religious (ACWR).

I am meeting with 150 women who do the same sort of archival work that I do.  We are the “keepers of the stories” for our religious congregations.  It is extremely interesting work and the stories are powerful.  Archivists know the stories!  Maybe that should be a bumper sticker!

We are attending classes on various topics and today (Friday) we had a choice of three tours to attend including a tour of the Ursuline Sisters of Louisville.  Of course that was my choice and you might be surprised since one of the choices was Churchill Downs Archives.  I was a bit torn because I would have loved to have gone to Churchill Downs but I really wanted to see how other communities solved similar issues we deal with such as how they file their photos of Sisters.  Seems like a simple question but it can be complex.

Below: One third of the convention visits the Archives of the Ursuline Sisters of Louisville, KY 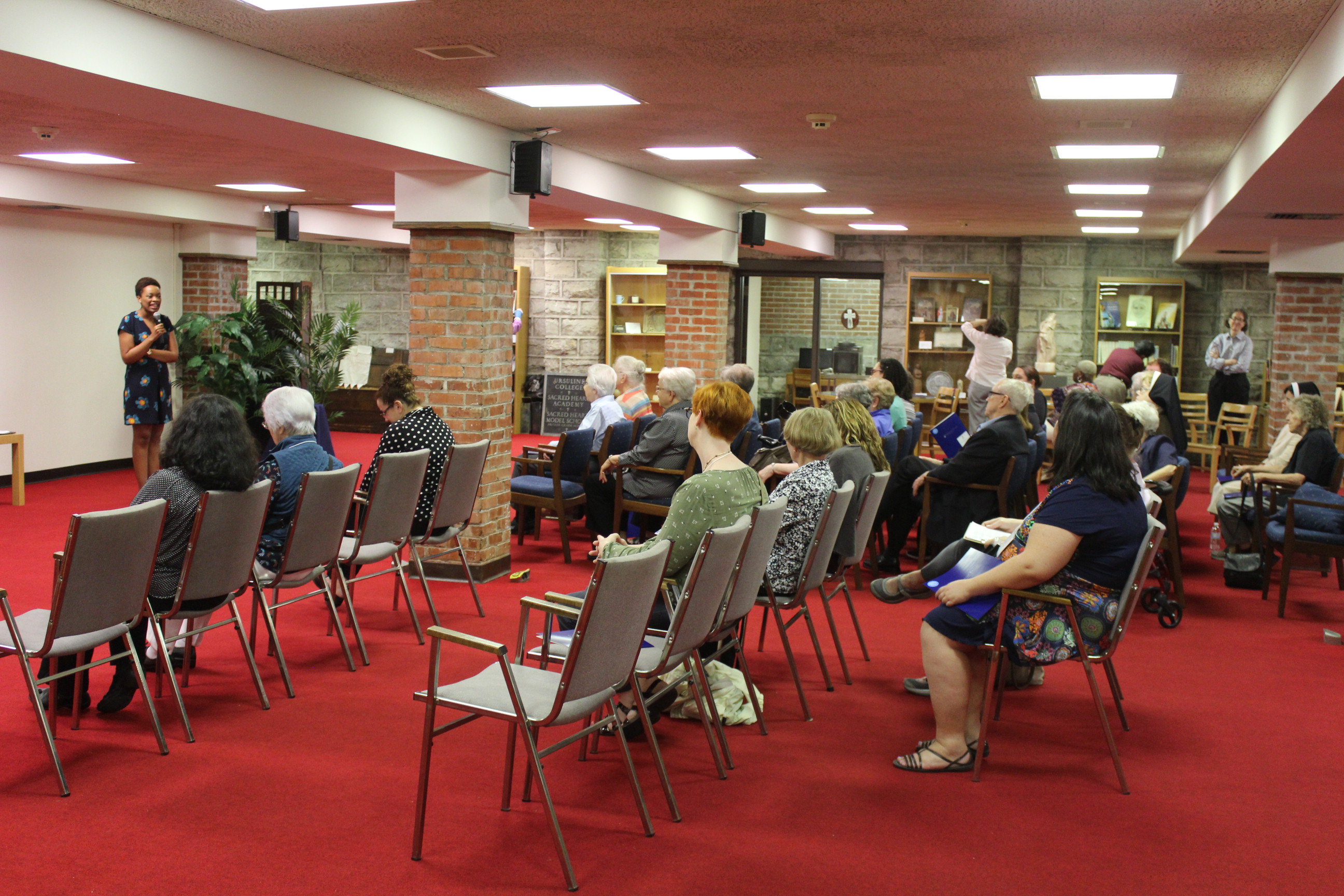 Below: A clever way to organize Sisters’ scrapbooks!

Below: More Scrapbooks!  We have several at Sisters of St. Mary of Oregon too!  I like this idea!

Below: The Archives of the Ursuline Sisters of Louisville are in the basement of their Motherhouse and have a wonderful brick surface to work around.  It is cool, clean and organized!

Below: Information is kept in files pertaining to living and deceased sisters and women who once belonged but left. 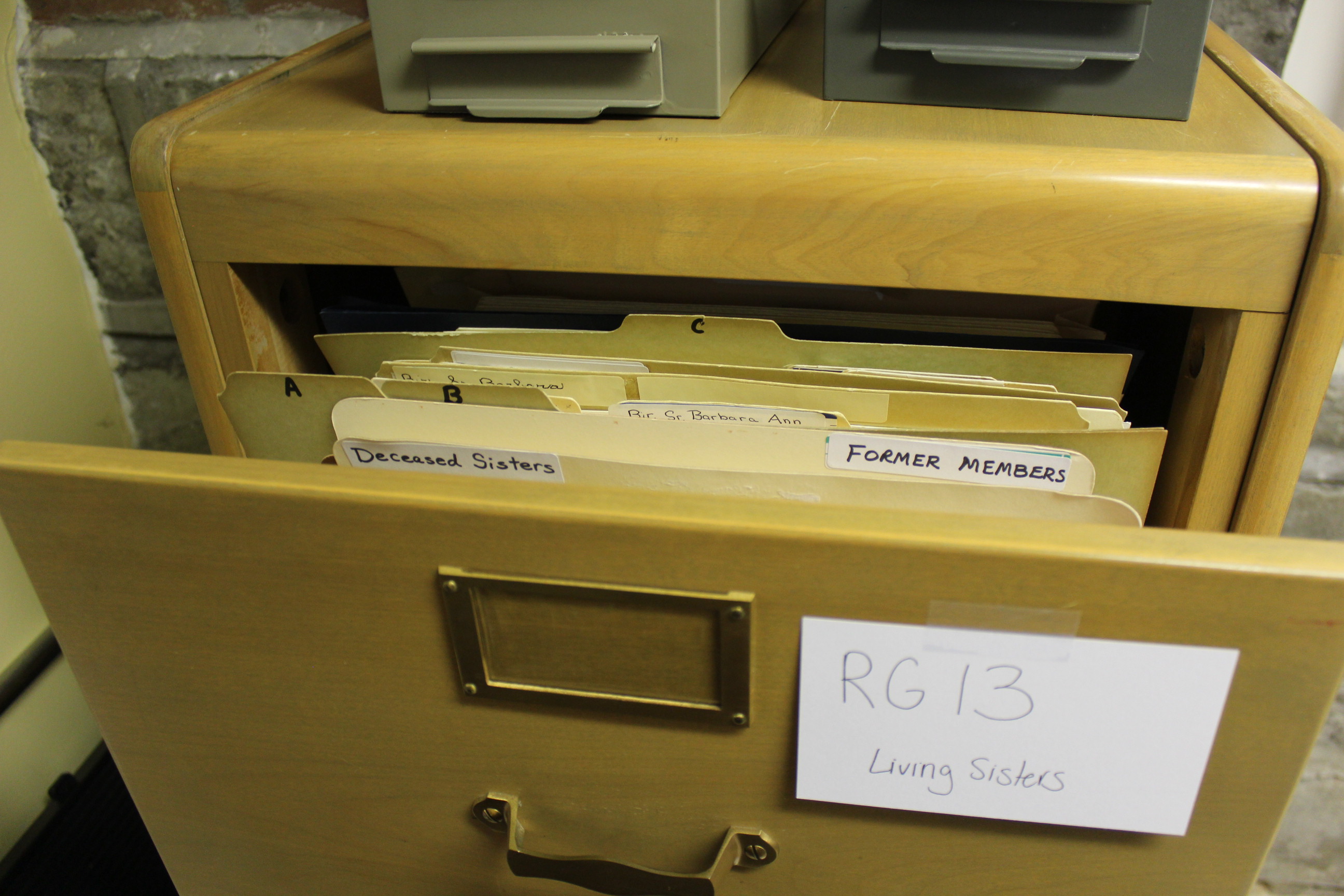 Below: My friend, Sr. Caritas Strodthoff OSF, a Franciscan Sister of Christian Charity in Manitowoc, WI checks out how they file photographs and slides.

Sister Alexa and Sr. Thanh began their “canonical year” on August 15, 2018.  The year will be filled with a balance of prayer, study and work.  This special year, set aside, allows a novice to learn the rudiments of religious life under the guidance of a professed sister known as her “Formation Director.  Sister Thuy Nguyen currently serves as the Formation Director for the novices.

BELOW: Candidate Alexa Weight asks for the community of sisters to support and teach her in her quest to become a novice. 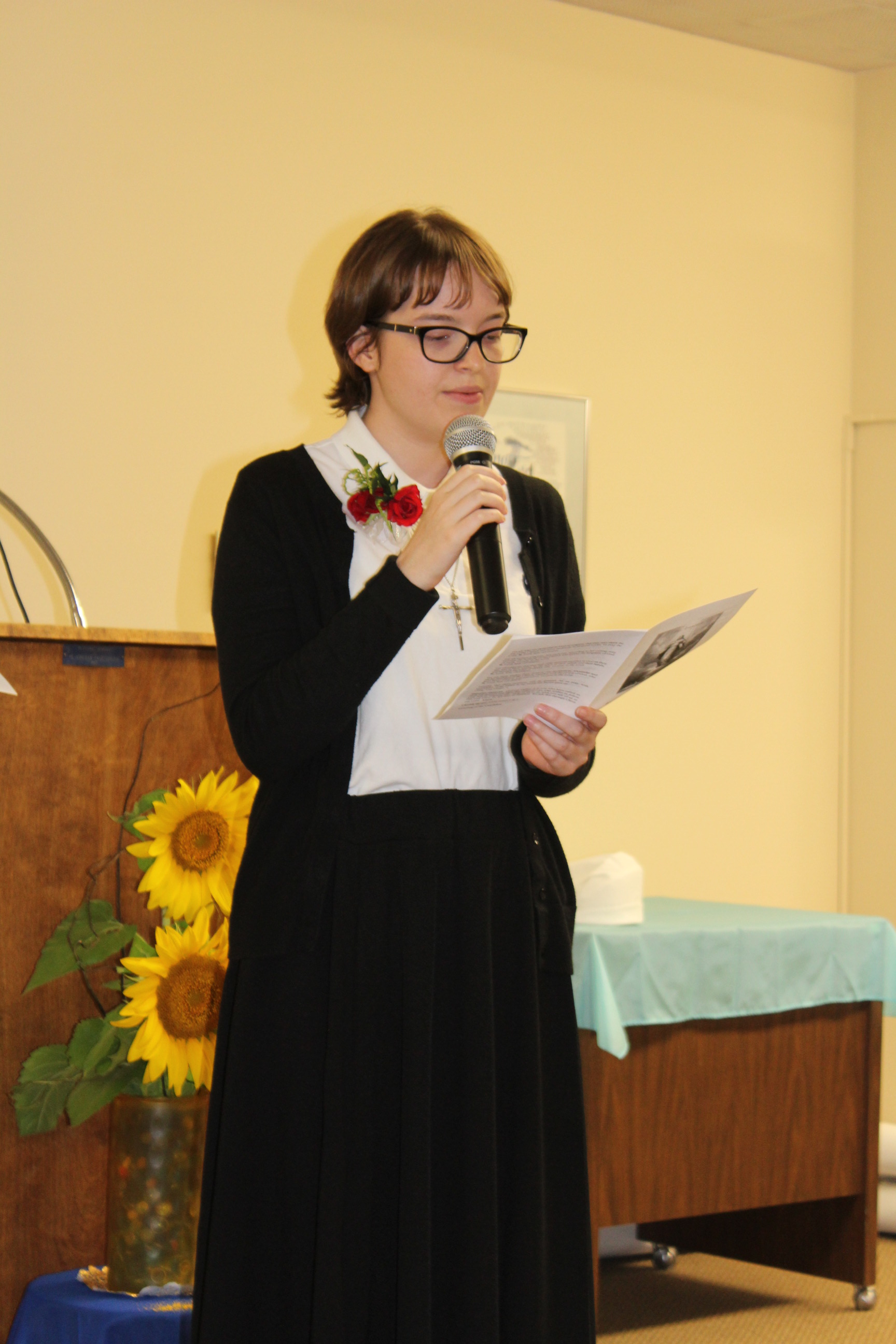 BELOW:  Sr. Charlene Herinckx, Superior General of the Sisters of St. Mary of Oregon, accepts Candidate Alexa’s request as Sr. Thuy prepares to present her with the white veil, a symbol of a novice.

BELOW: Candidate Alexa is now known as Sister Alexa as she receives the white veil, and constitutions of the community.

BELOW: The Sisters of St. Mary of Oregon are filled with joy at the sight of two novices!

BELOW: Sister Alexa’s parents and grandparents share in her joy on August 15, 2018 at the convent of the Sisters of St. Mary of Oregon in Beaverton.

BELOW: Mom and Dad joyfully congratulate Sr. Alexa on taking her next step in Religious life!

BELOW: Sr. Colleen Schmitt serves the ice cream cake at the reception for the family and Sisters! 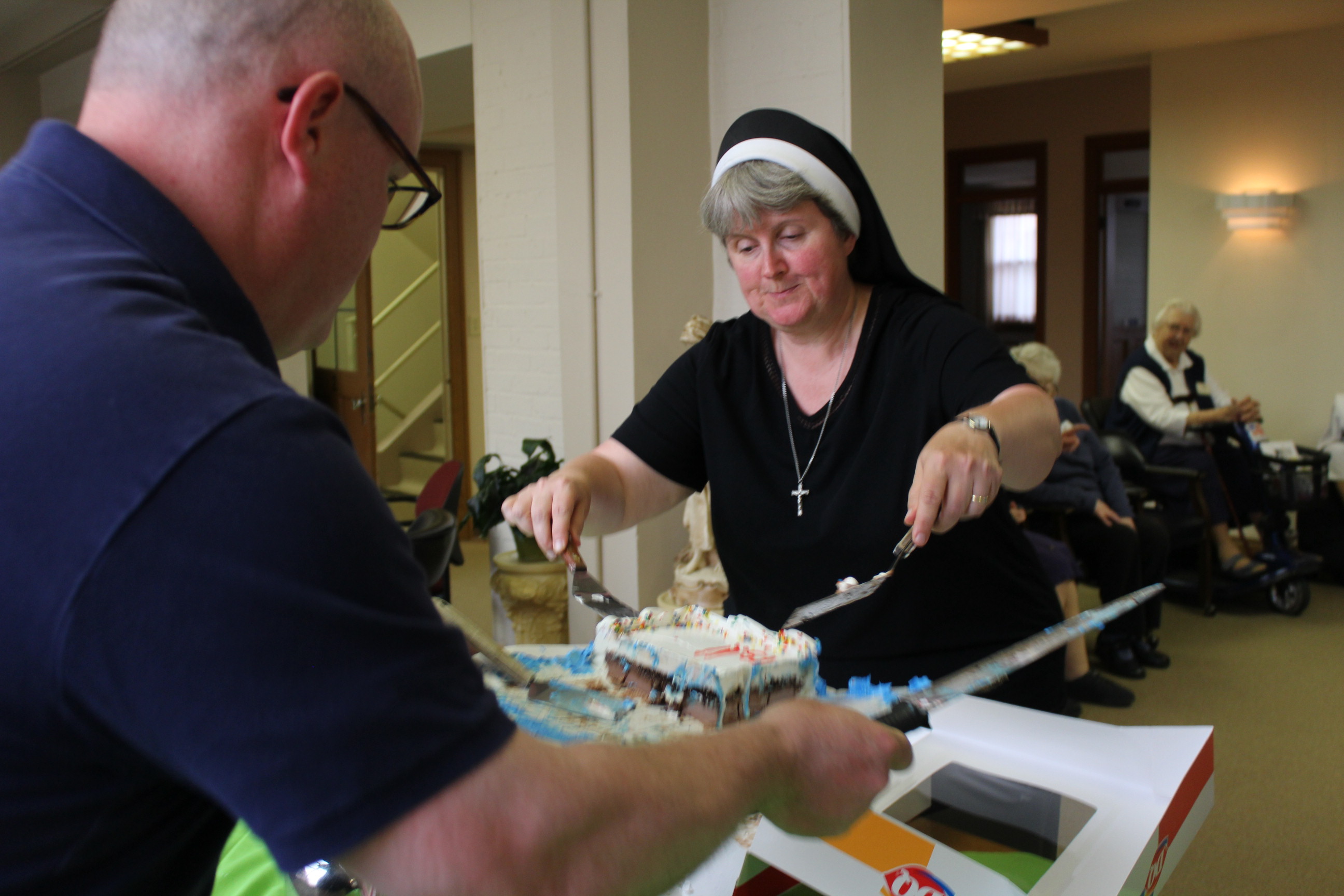 BELOW: Mother, Daughter and Grandmother!  Congratulations Sr. Alexa and family!

We said “Thank you” to Tania “Vanderschuere” Rhein for 9 years of service on the Valley Catholic School Board last night.  Tania was one of my Teacher Assistants back in the day at St. Mary of the Valley / Valley Catholic.  Way to go, Tania!  THANK YOU!!! (I can still spell Vanderschuere!)

All should be Worried

Thank you, Ed, for this thoughtful, articulate article on Religious Freedom. 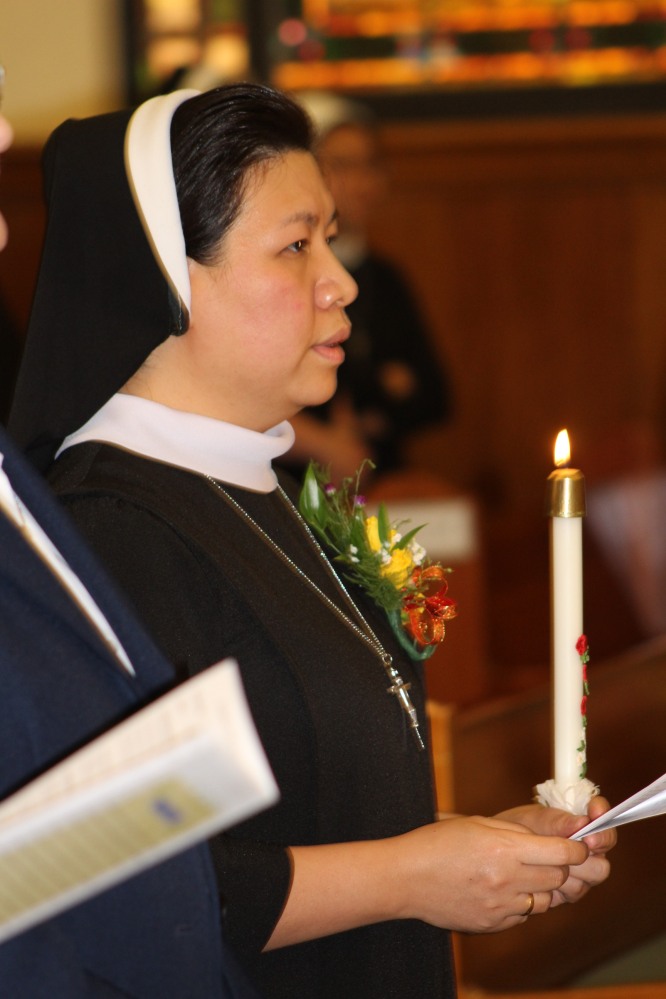 On August 15, 2017, Sr. Rosina Pham made her Final Vows with the Sisters of St. Mary of Oregon (SSMO).  The ceremony took place in the Convent Chapel, Our Lady of Perpetual Help.  August 15, the Feast of the Immaculate Conception, is the date which the Sisters generally make vows.  It is a very special time of the year for the Sisters and an extremely important occasion filled with joy!  Sister Rosina is a very special member of the community and works at Maryville Nursing Home, which is one of the ministries of the SSMO’s.

BELOW: Sister Rosina Pham responds to the call to live her life as a religious Sister of St. Mary of Oregon. 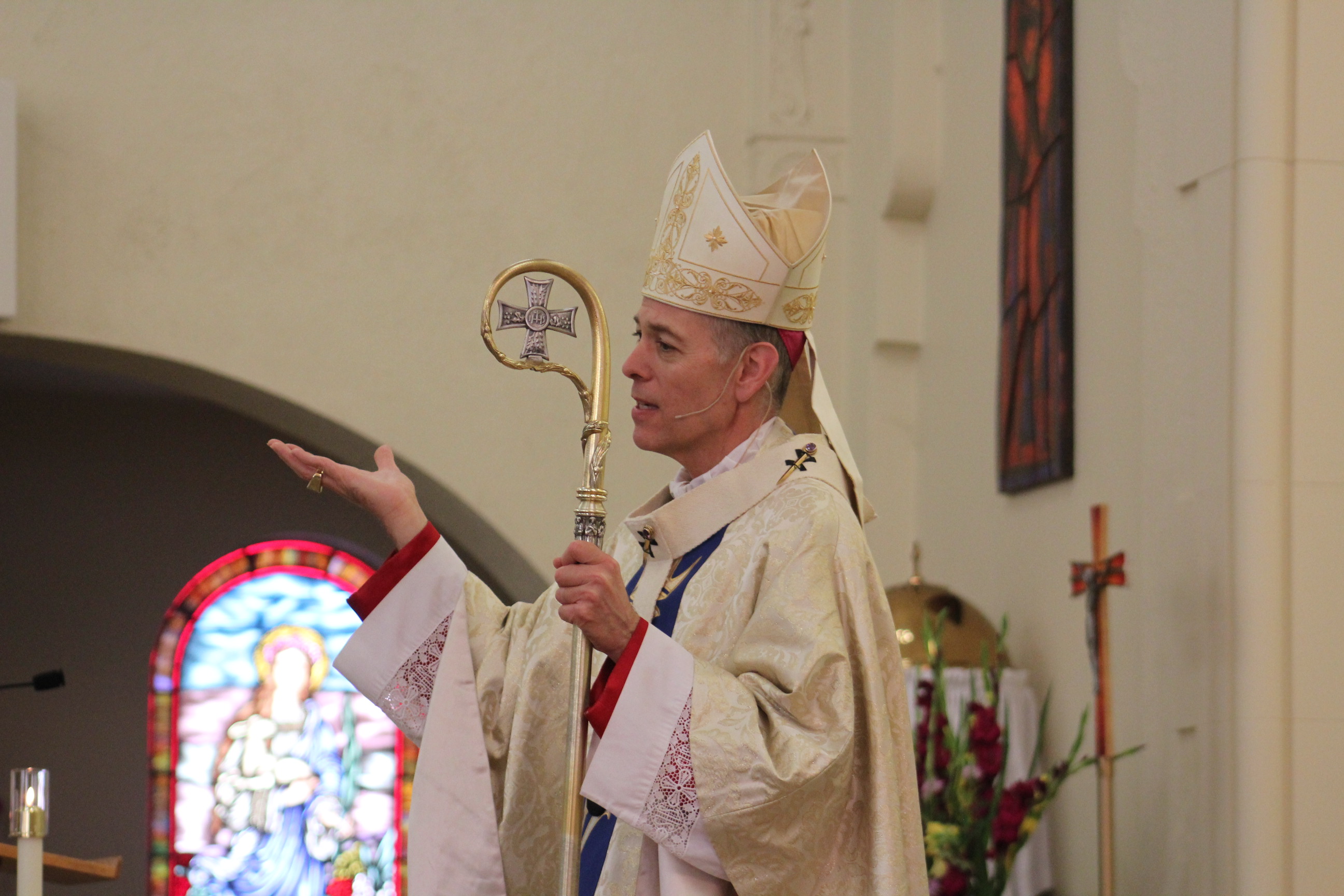 Sister Rosina answers, “Yes” to the call to live her life as a Sister of St. Mary of Oregon. 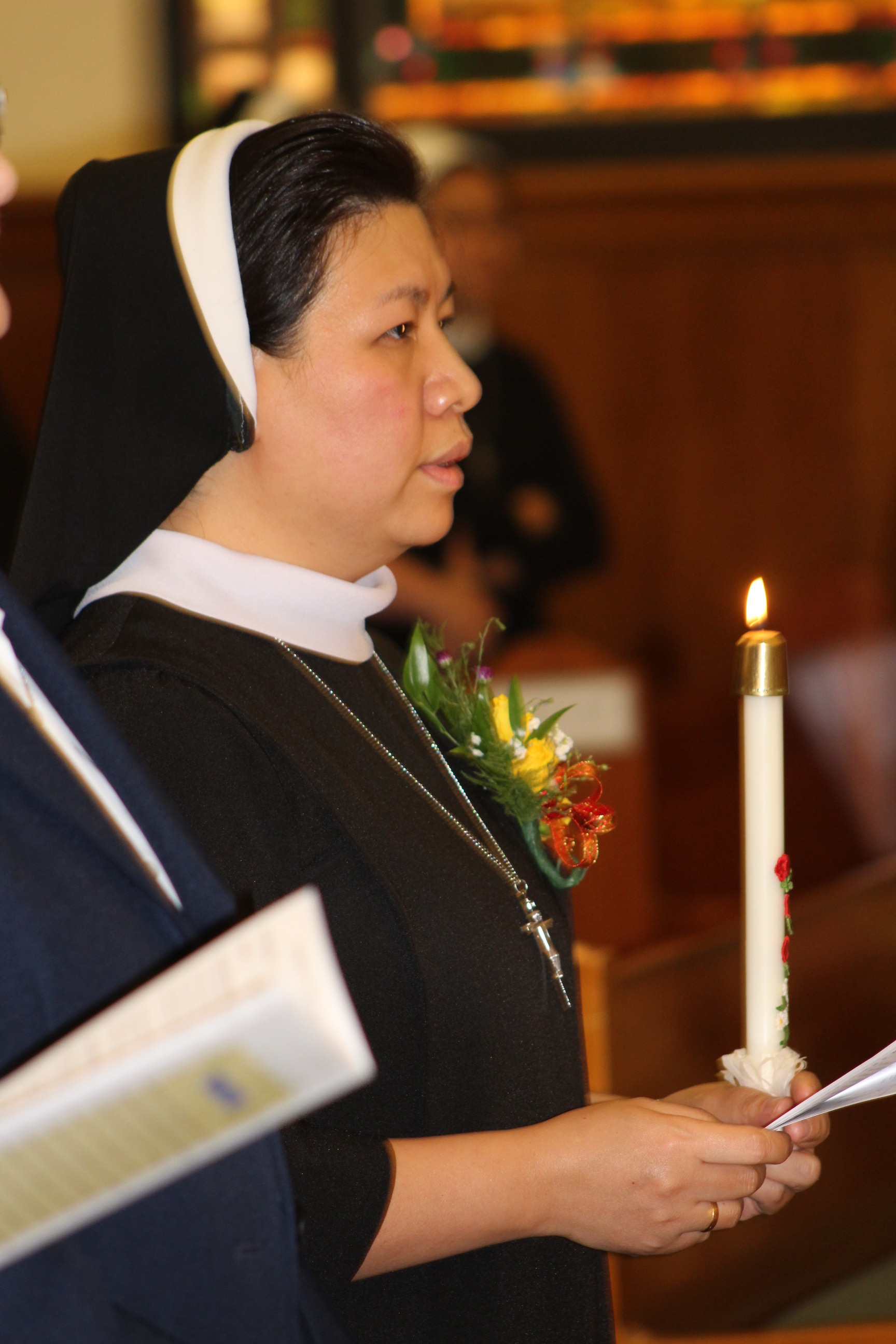 Sister Charlene Herinckx, Superior General of the Sisters of St. Mary of Oregon and Sister Rosina sign the vow documents after the recitation of the public vows. 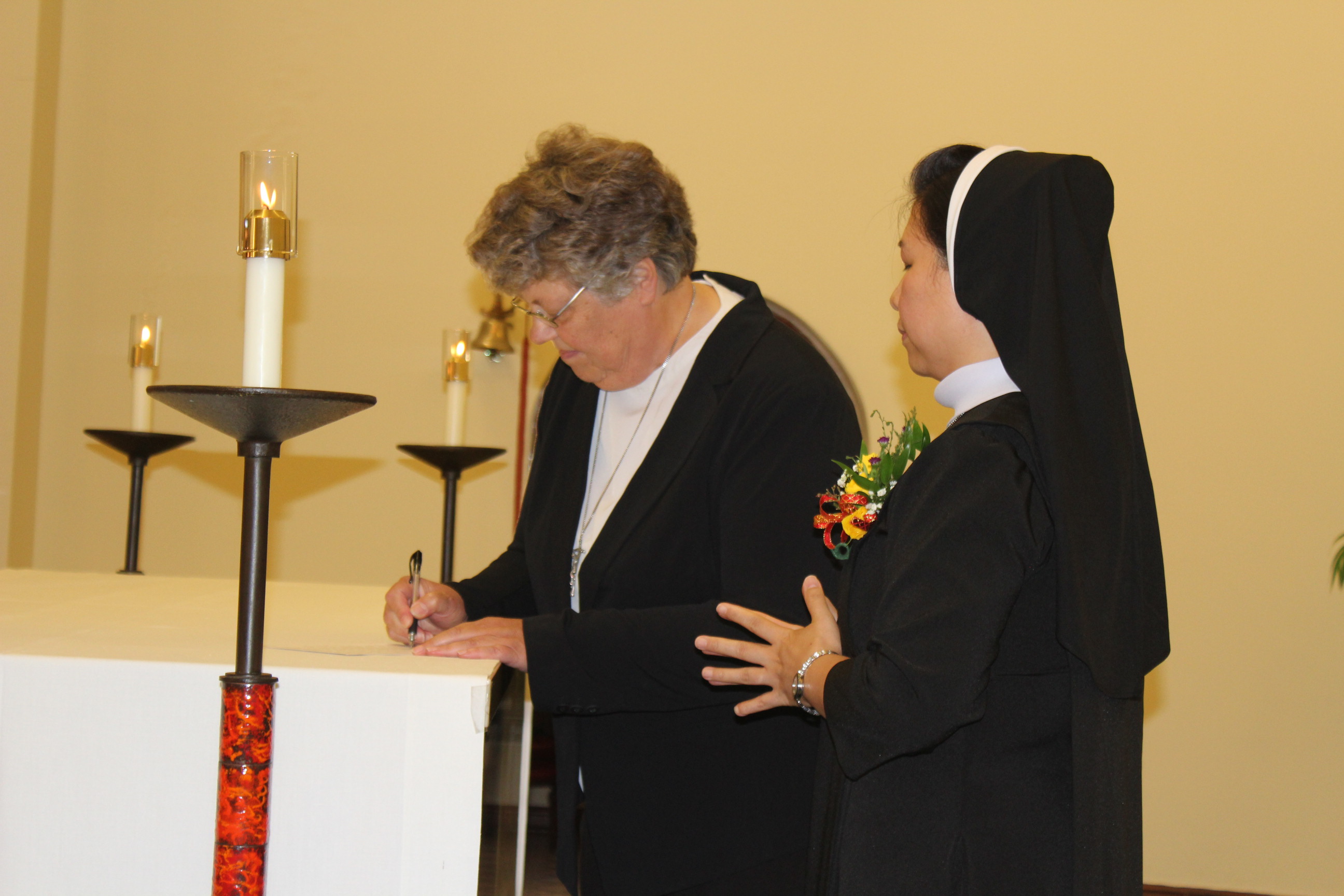 Priest friends of Sister Rosina take part in the ceremony.

Sister Rosina with her brother, parents and Archbishop Sample. 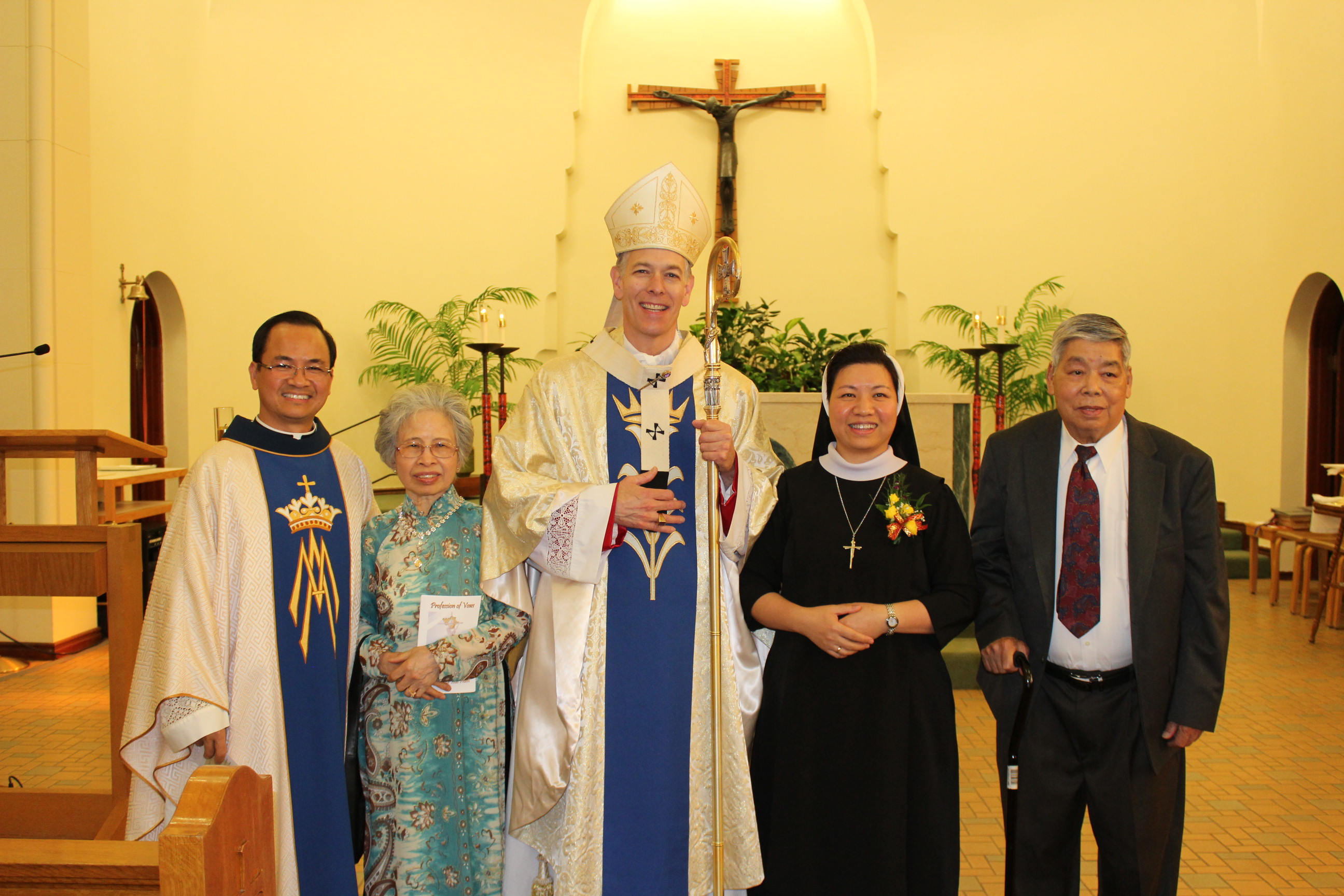 Sr. Thanh Pham, asked to join our religious community this summer after discerning this decision for a year.  Sr. Thanh Asked the Sisters this morning to help her and teach her as she learns to live religious life.  During the ceremony Sr. Thanh received the white novice veil and added “Sister” to her name!  It was a joyous occasion for the Sisters of St. Mary of Oregon!

While she is a deft deflector of credit. praise and plaudits, her years of service and leadership have been marked with growth and innovation in her religious order and its many ministries which largely focus on education, healthcare and community service.

Founded in 1886, the first and only order founded in the state of Oregon and housed in their iconic green-domed motherhouse in Beaverton since 1930, the Sisters of St Mary of Oregon describe themselves as “living as women of prayer, in simplicity and sisterly love, called to be compassionate and joyful servants of the Lord.”

Beloved and respected by students, friends and colleagues alike, she embodies those traits in the very essence of her being and in bestowing the University’s highest honor upon her, we bestow it as well upon the prayerful. compassionate, charismatic joyful Sisters of St. Mary of Oregon, past, present and future.

The Sisters of St. Mary of Oregon and the family of Sister Charlene Herinckx were on hand to witness the wonderful award bestowed on her by the University of Portland! Congratulations Sister! #sistersblogs, #cyocamphoward, #ssmo, #Sistersofstmaryoforegon

BELOW: Sister Charlene Herinckx, Superior General of the Sisters of St. Mary of Oregon receives the Christus Magister Award from the University of Portland at their graduation exercises May 2017.

Below: Sisters of St. Mary of Oregon attend the graduation exercises at the University of Portland. 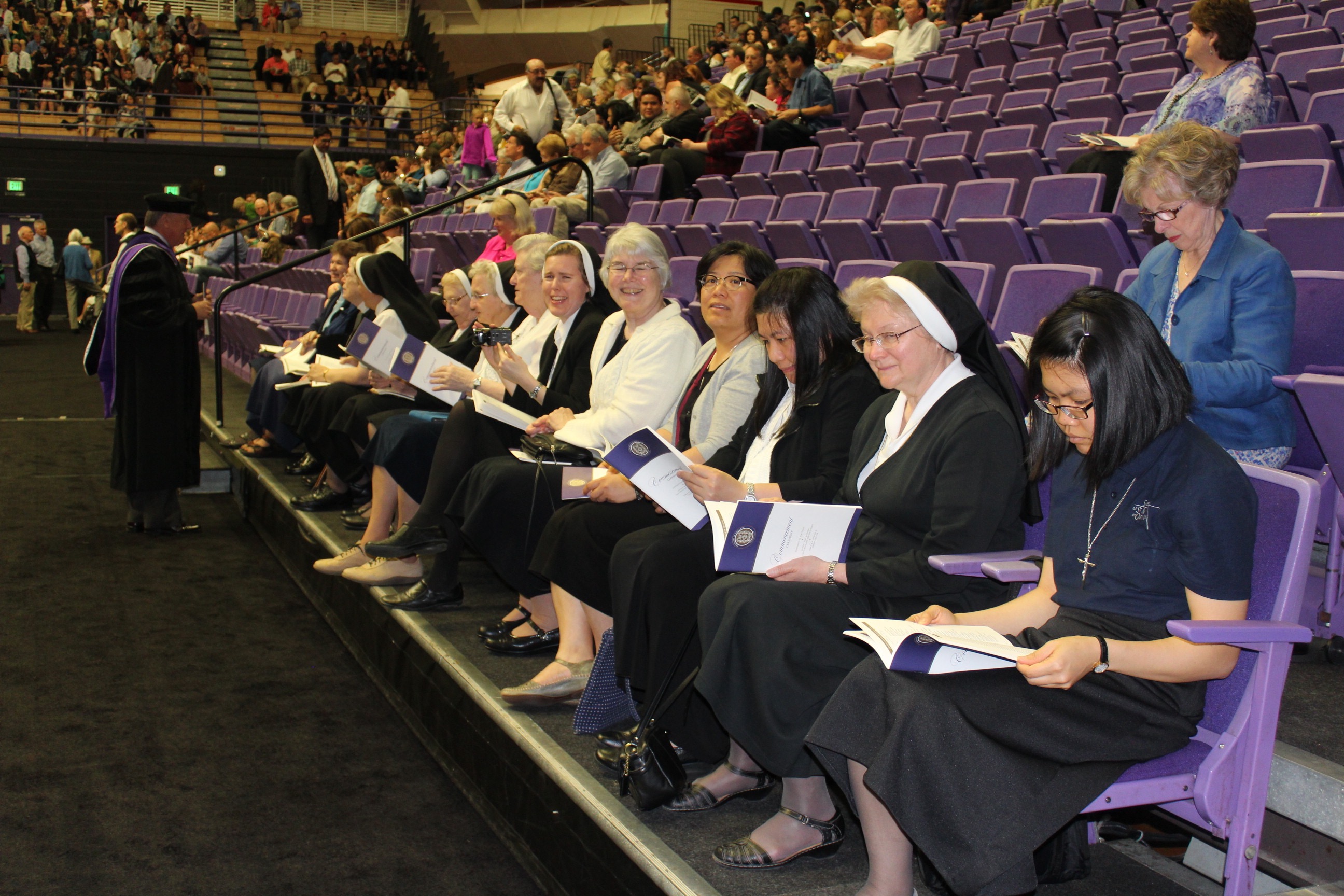 Below: Sister Charlene receives the award from President Mark Poorman.

Below: A close up of the medal depicting Christ the Teacher. 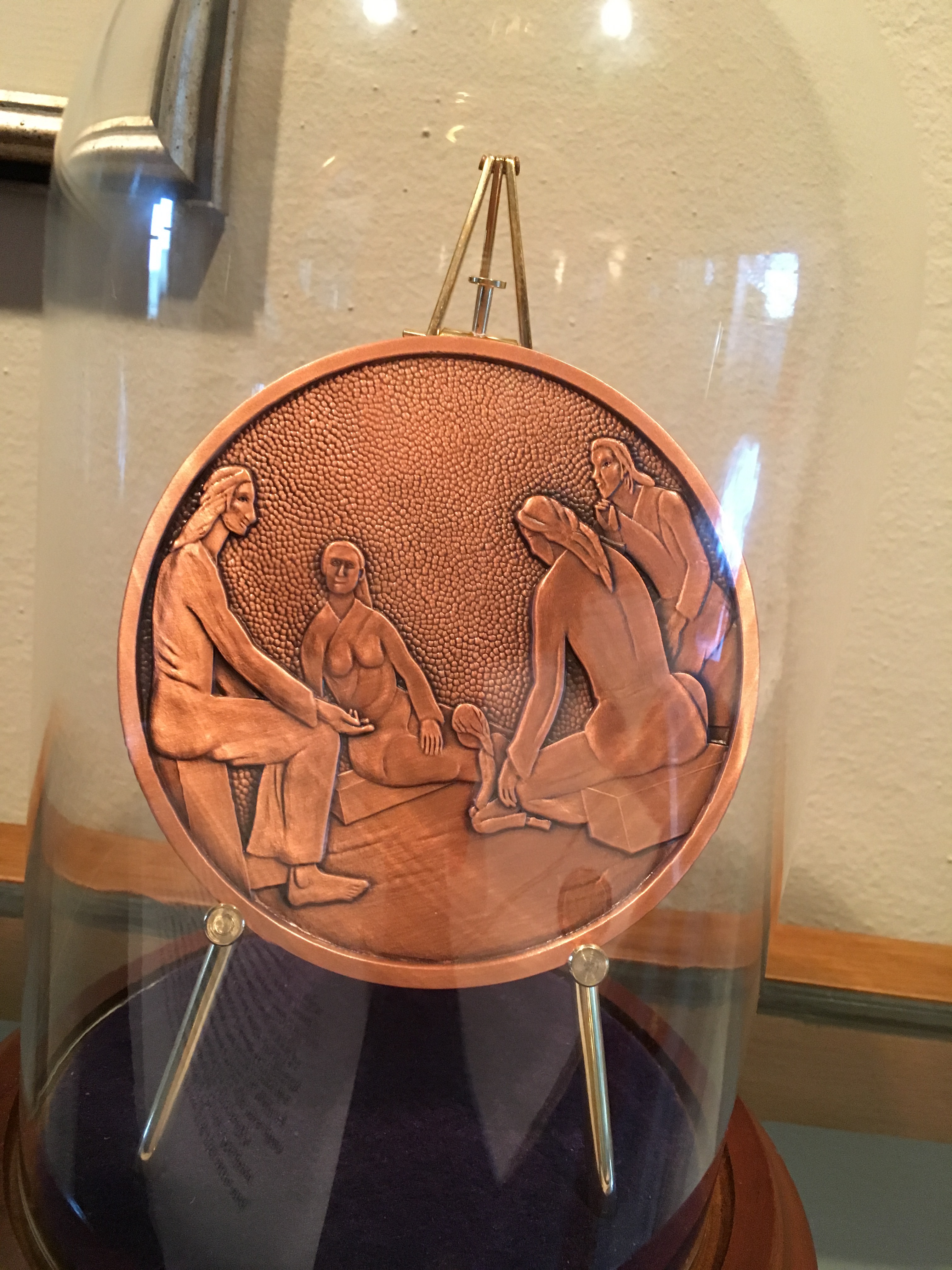 Holy Thursday commemorates the activities leading up to the Passion of Christ.  The meal (Last Supper) takes place with a sense of foreboding.  The Gospel writers describe it as a Passover meal.  Jesus talks about the bread and wine as elements of his own body as he shares the bread and cup of wine with those present.  On this night, Jesus washed the feet of the disciples and he announced that one of the twelve at the table would betray him.  Later in the evening, Jesus and his apostles retire to the Garden of Gethsemane where he prayed before being apprehended by members of the Sanhedrin and guards. He is taken away and will be crucified the next day, Good Friday.

Sr. Julie, Sr. Thuy, Sr. Michael Francine and Fr. Francis,  process through the chapel with candles & incense as part of the adoration of the Blessed Sacrament.  Members of the local community join the Sisters in the convent chapel for the service. #sistersofstmaryoforegon,