The “Massie” name is no stranger to CYO circles and volleyball groups in general.  The family reigns from St. Cecilia and have left their mark in the CYO Volleyball world for sure.  Martie Massey, a CYO Volleyball standout is in her Junior year at Oregon State.  I visited with her Mother this fall and heard the story about Martie walking on at Oregon State and securing a place on the team.  Martie was home watching younger sister, Zoe, play basketball in the City Championships when I asked her to tell me about her experience at OSU.

Martie, a Biology and pre-med hopeful is a junior this year and in her third year of playing volleyball for OSU.  I asked her to tell me the story.  She said she was a freshman in 09-10 and had played spring club volleyball.  People encouraged her to try out for the varsity team at OSU.  So she joined the practices and after three practices they asked her to stay!  She has been there ever since!

She reports great friends and a lot of fun.  Some of the best people she has ever met in her life.  I asked her what the highlights have been thus far.

– Finishing 8th place, one place out of qualifying for the NCAA tournament – hopeful for next year

Martie Massie plans to graduate next spring.  She is proud of the fact that her volleyball team has the highest GPA average of all the teams at OSU of 3.5.   Martie was named to the 2nd Team All Academic Pac 12 team this year.

CYO wishes Martie Massie God’s special blessings as she continues her education at OSU and toward her career path.  We are proud of her accomplishments! 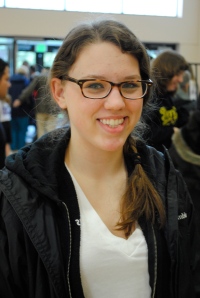