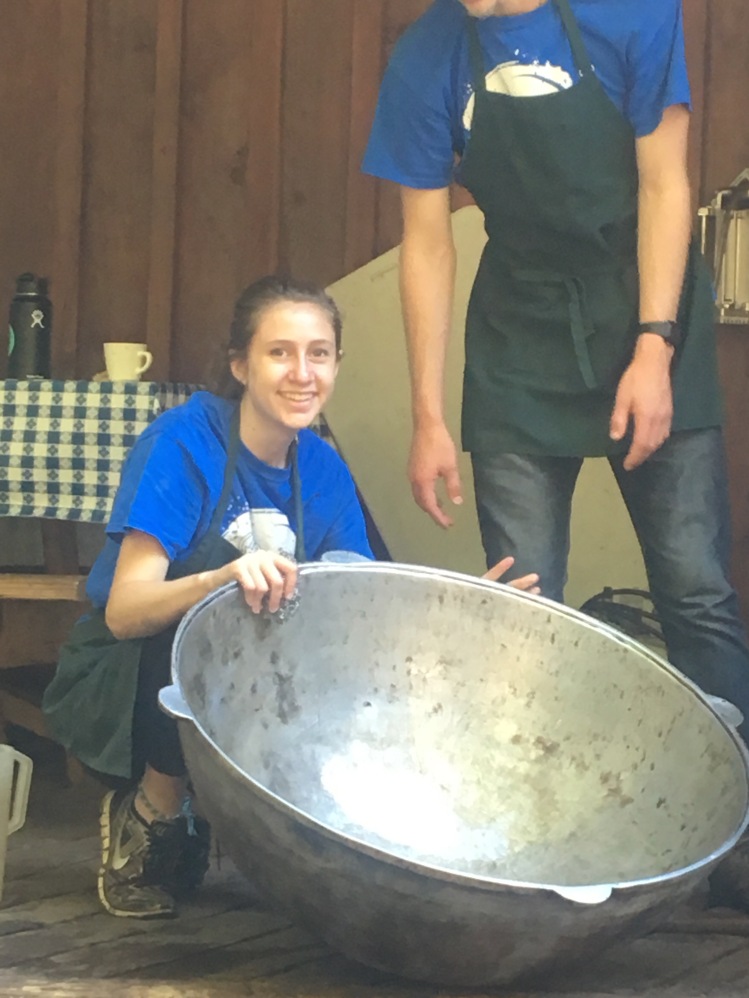 Several summer camp staff members stayed on with Camp Howard to tackle  projects for maintenance.  Each year one of the units of cabins is selected to work on in a scheduled sequence to keep the buildings in good repair. This year, the two original units, Fircrest and Greenwood were pressure washed, stained and trimmed.  The roofs were cleaned, boards were replaced as needed and the buildings were readied for another 6 years of service.  That is the number of years it generally takes to get back to the unit for another spruce up o the exterior.  Other projects are also taken on by the crew to get the camp ready for another year.  The staff always do a spectacular job and it is a joy to work with them.

Unfortunately this years work party was cut short due to the Gorge Fire.  Hopefully a few more days of work time will be available before everyone heads back to school.

BELOW: Emma Wycoff scrubs on the metal bowl used in the giant wok. 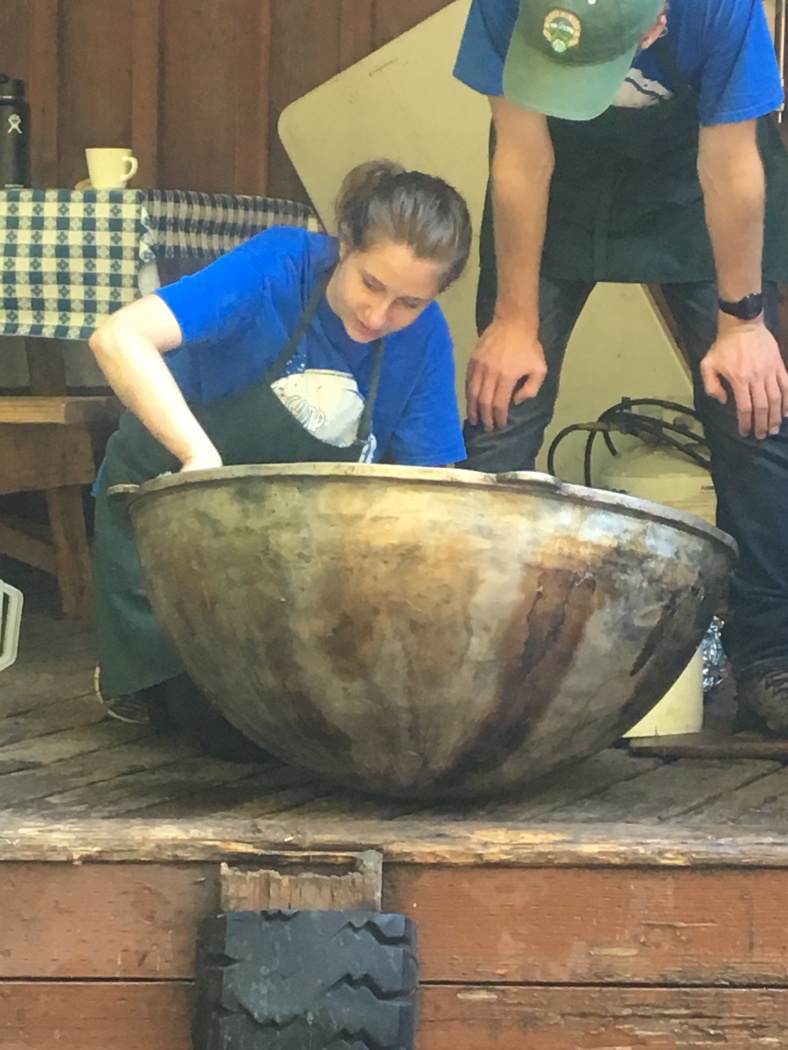 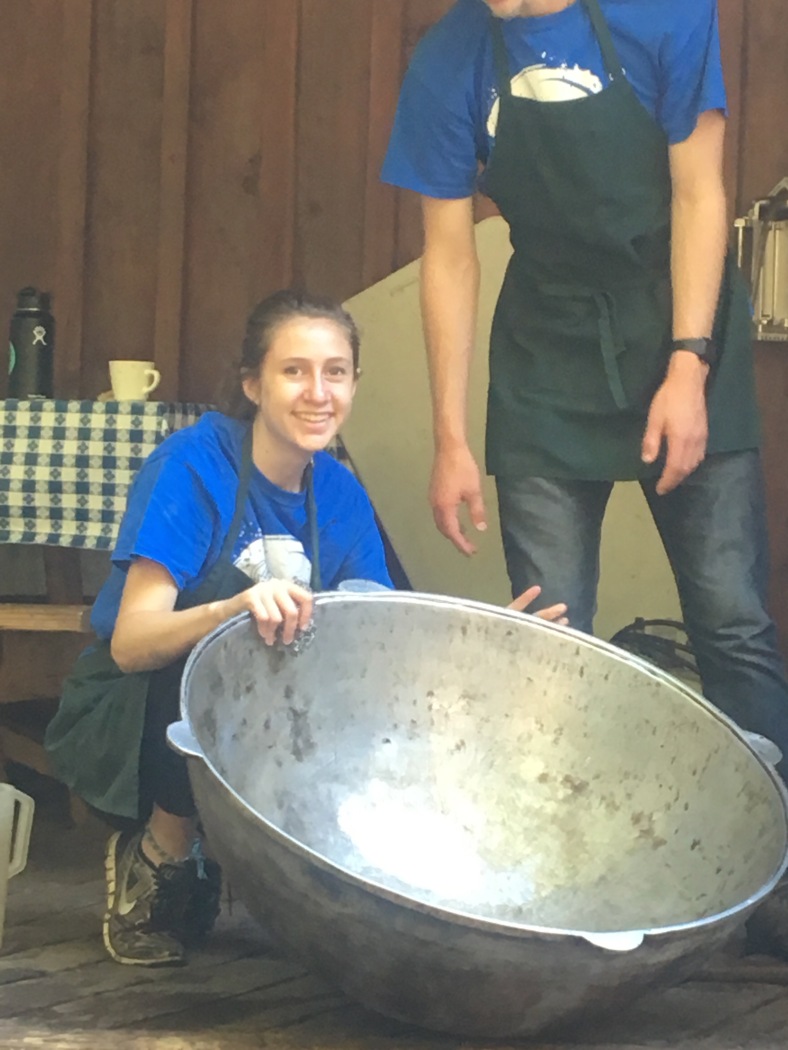 Anna O’Boyle learns to operate the lift for pressure washing and painting. 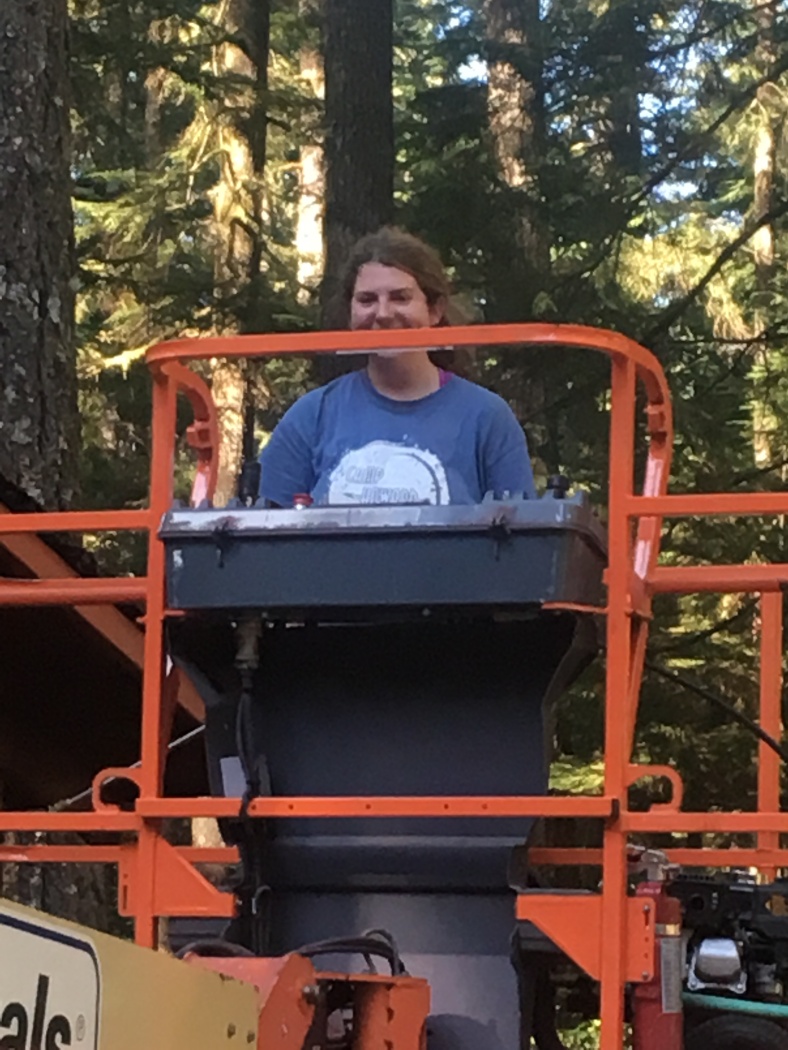 Emma Wycoff also learns to operate the lift as the two girls take on some major responsibilities during the summer work sessions. 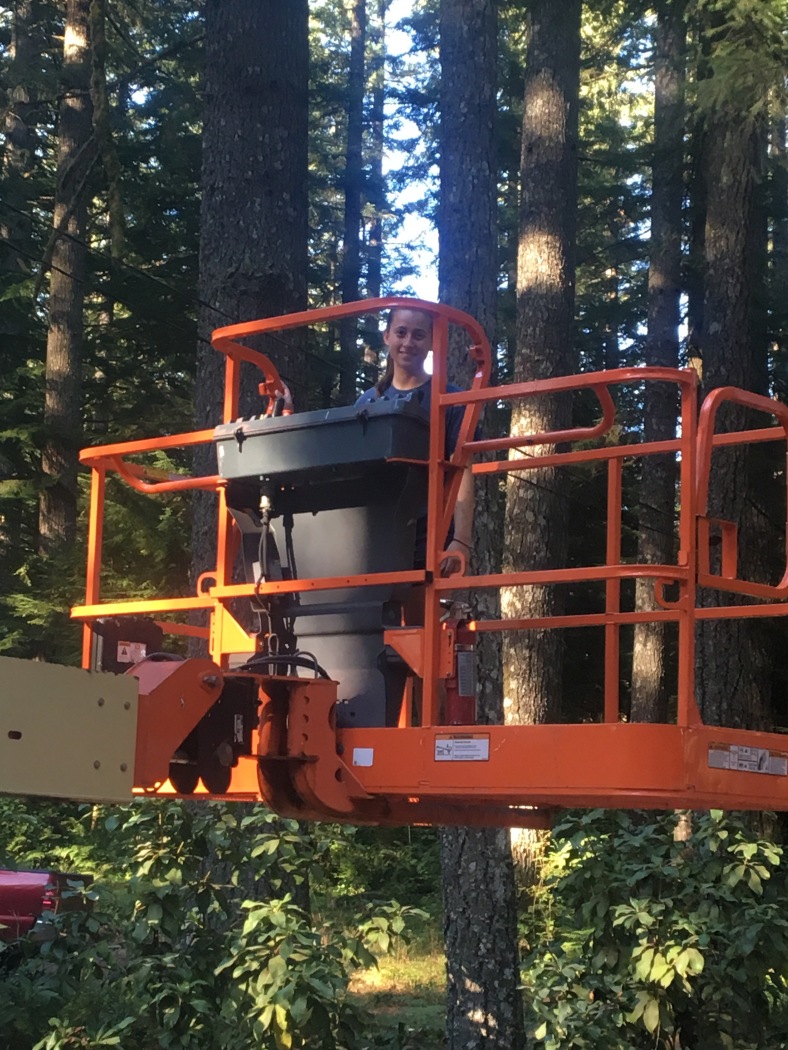 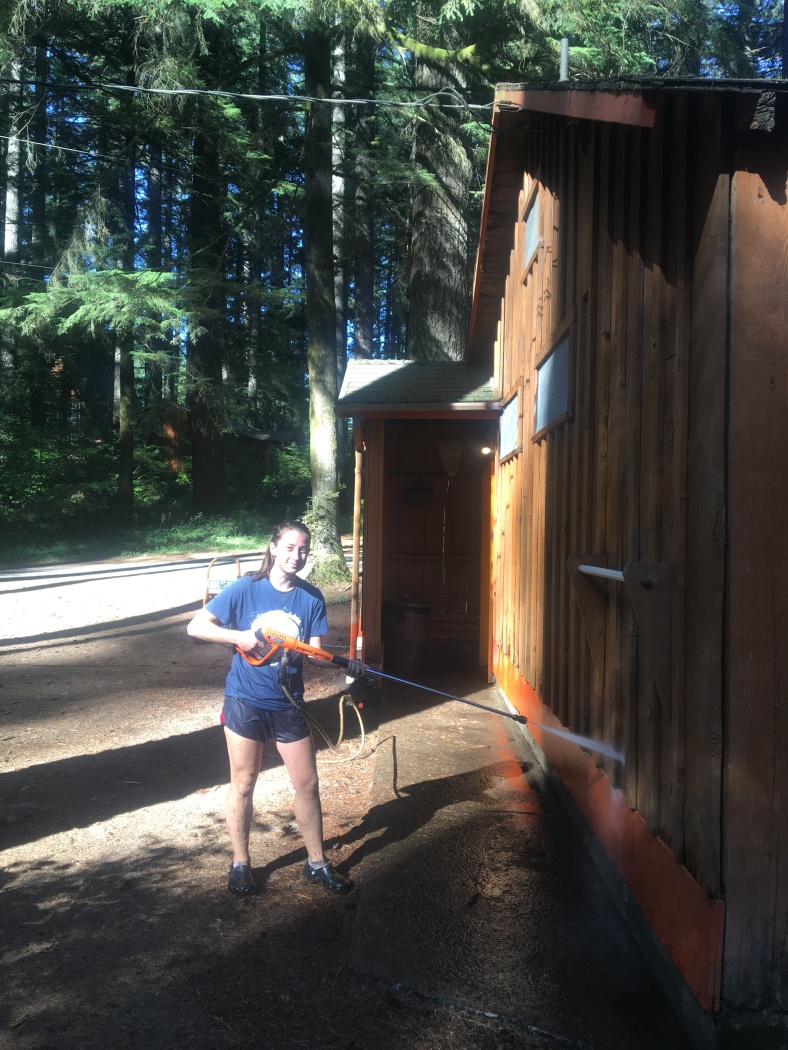 You may wonder…”What happens after the summer programs and Outdoor School programs at Camp Howard? You might not know that Camp Howard is open all year round and people rent the camp for family events like weddings, family reunions, retreats, church picnics etc. During January and most of February we do a lot of interior work like painting walls and renovations. Right now Aldergrove Unit is being renovated on the interior. Bunks and walls are being painted, things are being spiffed up so that campers will come to the unit and really appreciate the new clean look.

During the winter we sometimes get strong winds. Generally nothing happens except branches might fall and litter the ground. But every so many years we get especially high winds and these extra strong winds take down trees that are diseased. We lost one tree to high winds this winter and it hit All Saints Cabin in Aldergrove. It knocked the cabin off its foundation and the porch came off. It was a pretty hard hit and I am really glad we did not have any campers in the camp when it happened.

You may be interested to know that most often the trees that come down in the wind storms are the Hemlocks.  Camp Howard is made up of mostly Douglas Fir, Oregon’s most popular crop tree.

The photos below show the damage that was done. We are in the process of fixing the cabins and my next posts will show where we are in that process. Check out these photos of the cabin and let me know your thoughts or reactions. 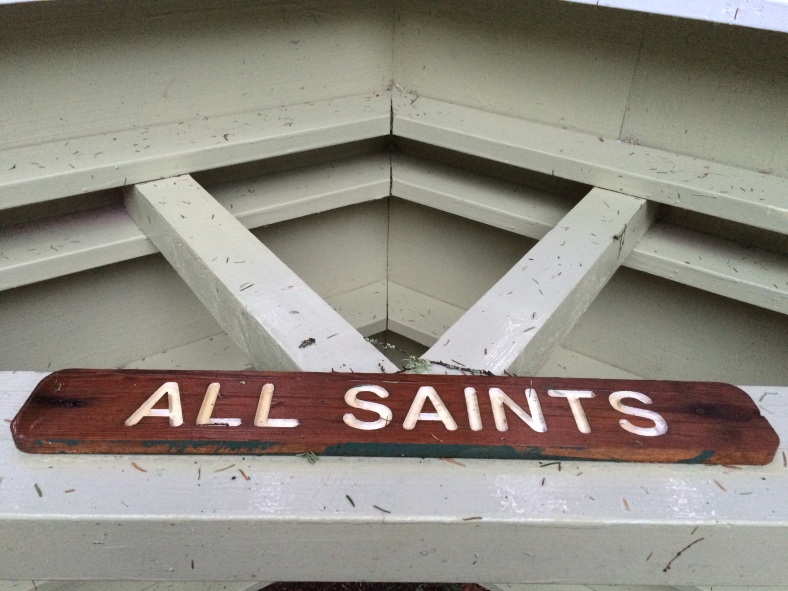 All Saints Cabin in Aldergrove unit was built in 1995. It was hit by a tree this winter and knocked off it’s foundation. 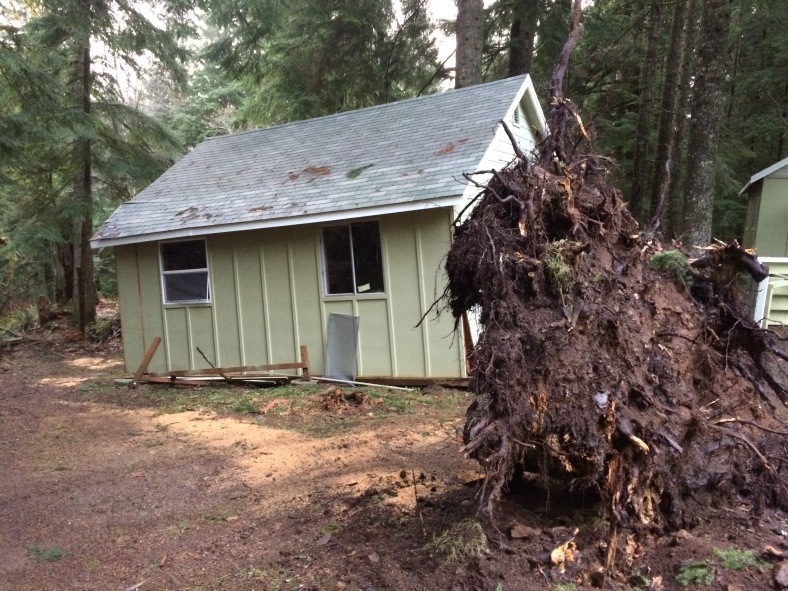 The rootball of the Hemlock tree that fell can be seen here as well as the “shadow” of where it lay prior to being sawed into “rounds” and removed to be made into firewood. The shadow is the sawdust! 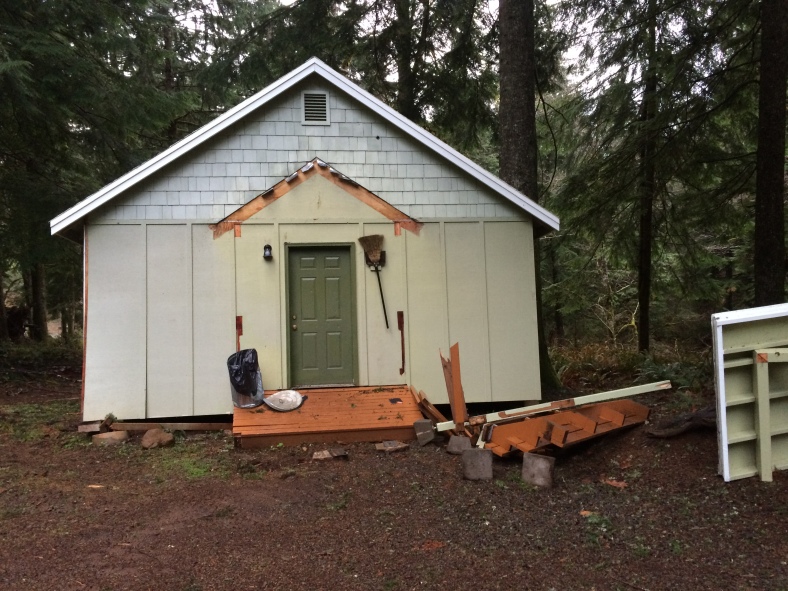 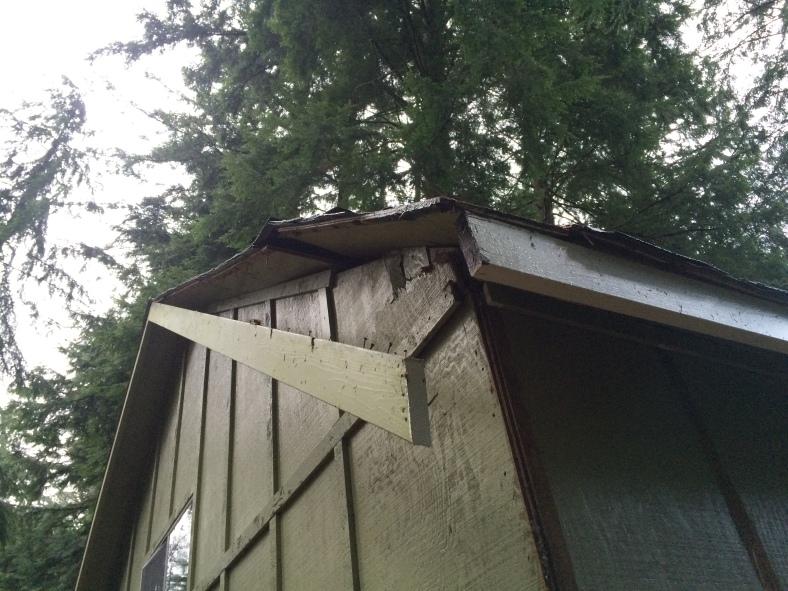 The fascia board hangs from the building by a few nails and the building has a number of issues that must be addressed. 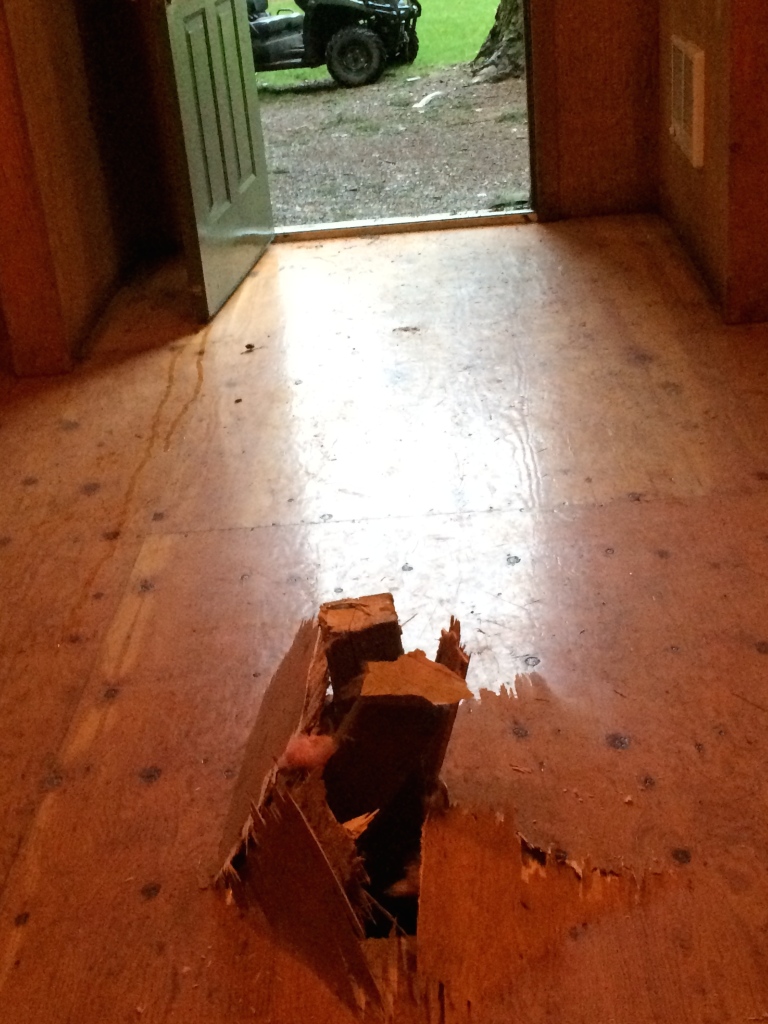 When the building was thrust against the tree and moved off the foundation, it continued its downward movement and part of the foundation came through the floor of the cabin. 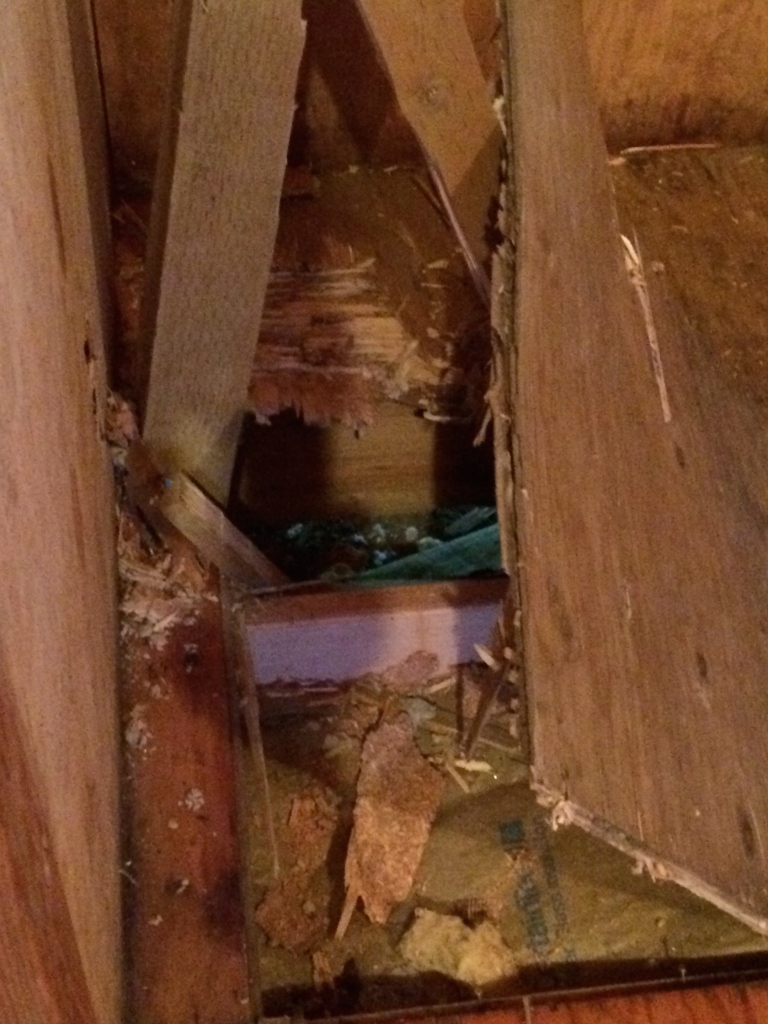 Another area where the foundation punched through the floor 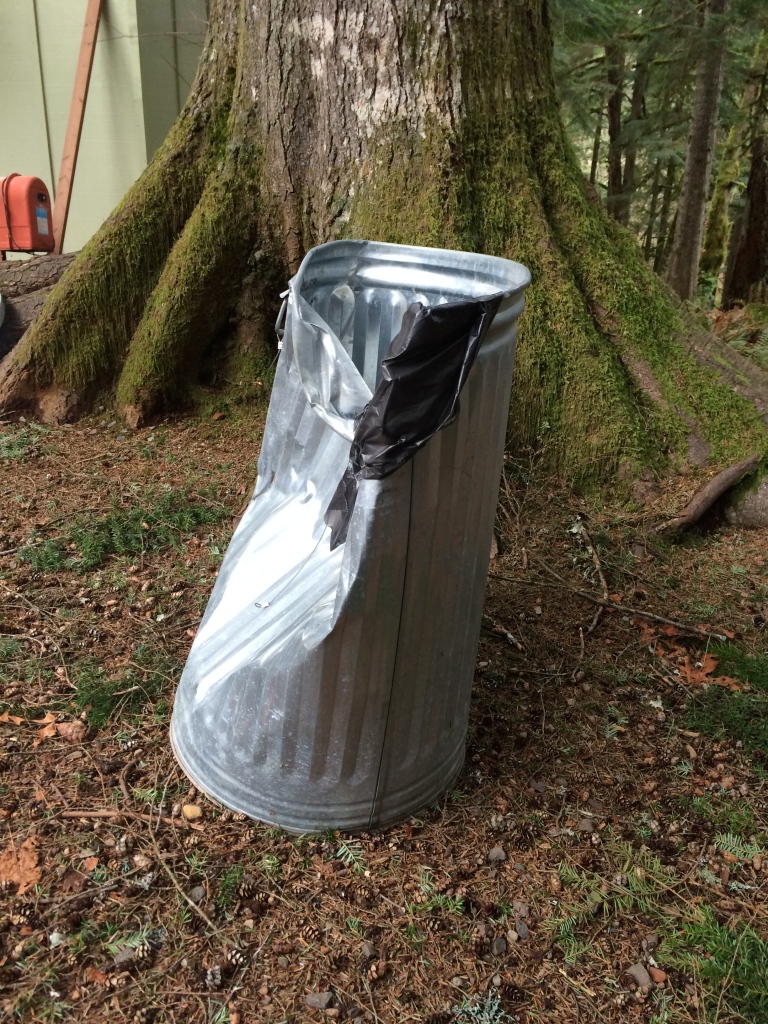 Even the garbage can did not escape a “crunch!” Wrong place wrong time!